To get from source code to a playable ROM (*.vb) file, you’ll need to build your code.

VUEngine Studio allows you to build your project and queue running it in an emulator, flash to your flash cart(s) or export the ROM, all in a unified workflow and in fully embedded tools.

The central spot for building is the Build Panel. 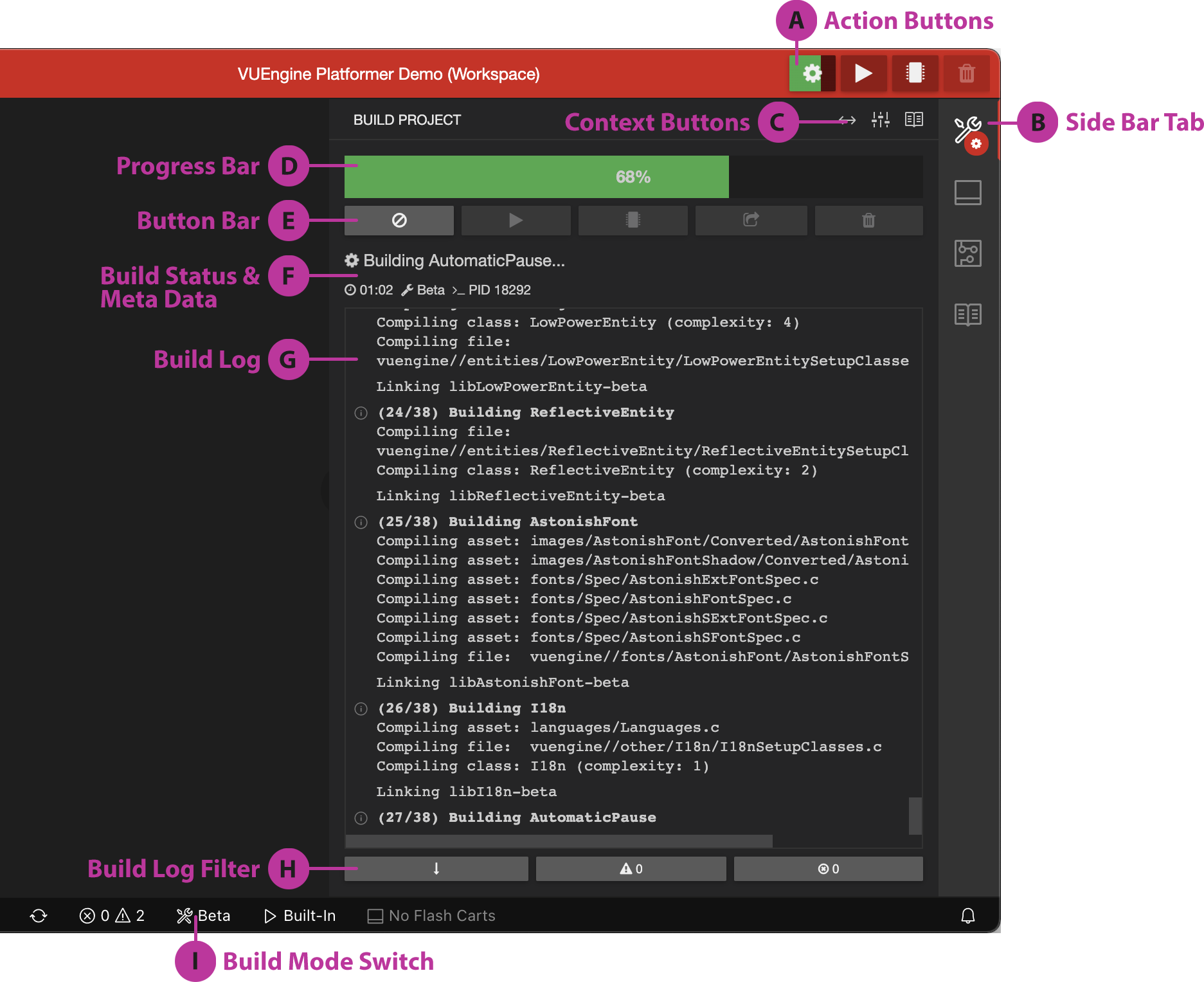 The Action Button Bar (A) in the top right of the application allow you to quickly start a build, run or flash a game, or clean the build cache. You’ll also be able to see the progress of builds or flash cart writes on the respective buttons.

If you click on Run or Flash without a ROM being built yet, a build will start and the respective action will be queued and executed once the build is completed. Click the button again to unqueue. Click the other button, respectively, to queue/unqueue that action as well. Clicking the Build button while a build is running toggles the Build Panel.

Click the Clean button to delete the build cache for the current mode.

The progress bar on the Build button will turn yellow once a warning occured. It will be colored red if a build failed.

The Build Side Bar Tab (B) allows you to toggle the visibility of the Build Panel by clicking on it. It can also shows the current build status:

The Context Buttons (C) in the Build Panel’s header allow you to (in this order):

The Build Progress Bar (D) Shows you the progress of the current build. It will turn yellow once any warnings occur.

The Button Bar (E) below the progress bar allows you to (in this order):

Below the build button bar, you’ll find the current build’s status. This includes the current activity, running time, Build Mode and ID of the build process. On Windows machines, if you are building through WSL, you’ll also find an indicator for that here.

The large area in the center of the build panel is holding the Build Log (G). In shows the output of the build process running through make. Errors are highlighted in red, warnings in yellow.

The Build Log Filter buttons (H) below the Build Log allow you to filter the Build Log to show only warnings (center button) or errors (right button). By default, the Build Log automatically scrolls to the very bottom when it gets updated. Use the left button to toggle that behaviour.

A Build Mode Switch (I), which shows the current build mode, can be found in the Status Bar. Click to change the build mode. See the chapter below for more into about Build Modes.

VUEngine can be built in different modes, for different purposes. You can change modes in various ways:

The following modes are available:

Normally, you’ll work in Beta mode, which includes a selected set of debug asserts. When debugging, you’ll want to switch to Tools mode, to include the engine’s various debugging tools, or to Debug mode for the full set of runtime assertions and debug output. Be warned that Debug mode is heavy on resources and has the potential to slow down your program considerably. Finally, to build a releasable ROM, you’ll want to build in Release mode to get rid of any asserts or debug flags.

Additional build options are available through the settings dialog. These will prove helpful when having to debug harder problems.

Sometimes you may want to, or have to, clean up the build folder before starting a build to start with a clean plate.

Hit the Clean Action Button, use the keyboard shortcut ⇧⌥CShift+Alt+C or use the command palette to execute the Build: Clean Build Folder command.

This will delete the respective subfolder in the build folder for the currently selected Build Mode (build/{mode}).

If, for some reason, you need to run certain Tasks or Commands before or after each build, you can set up pre and post build tasks according to your needs. There’s two preferences for that take any number of Tasks or Commands and work through them sequentially.

In the above example, the output ROM would be patched through the “Patch ROM” Task after the build completed.

See the Tasks page to learn how to set up a Task.

Tip: The JSON preferences editor will assist you with auto completion of option names and, if applicable, values.

When a build fails, you can, in the best case, just follow the error messages to find and fix the problem, and get the build to succeed again. Error messages can often be a bit cryptic, though. See below for info on how to diagnose build errors.

Since the engine makes heavy use of pointer logic, it is really easy to trigger difficult to find bugs. In order to mitigate this issue, VUEngine provides the following aids:

Use the ASSERT macro to check every pointer or variable which can be troublesome; in particular, place an ASSERT checking that the this pointer passed to the class’s methods is not NULL.

The engine provides two kinds of ASSERT macros, which check a given statement and throw an exception with a given error message if this statement returns false. These macros should be used throughout the code to make debugging easier. Since the engine relies on heavy pointer usage, it is common to operate on a NULL pointer and get lost.

Only inserted when compiling under Debug mode. It is used at the start of most of the engine’s methods to check that the this pointer is not NULL. Since the MemoryPool writes a 0 in the first byte of a deleted pointer, this helps to assure that any memory slot within the MemoryPool’s pools has a 0 when it has been deleted.

Another good use case for this would be to check an object’s class against the expected class as shown below.

Inserted under any compilation type (NM stands for “non maskable”). This macro is meant to be placed in sensible parts of the code. Here’s a few examples of usage in VUEngine:

One of the most difficult, and common source of hard to diagnose bugs are uninitialized variables; random crashes or completely strange behavior often are caused by not properly initialized variables. To aid the detection of such mistakes, set memoryPools.cleanUp to true in config/Engine.json to define the __MEMORY_POOL_CLEAN_UP macro. This will force the engine to put every memory pool’s free block to 0 when the game changes its state, so, if the problem gets solved by defining such macro, the cause is, most likely, an uninitialized variable.

Whenever crashes appear more or less randomly with alternating exceptions, the cause will be, most likely, a stack overflow. Try to reduce the memory pool size to leave a bit more room for the stack. Since the safe minimum for the stack is about 2KB, your memory pool configuration should not exceed 62KB (depending on how deep the stack can grow because of nested function calls, this limit could be lower; this is specially the case when compiling under Debug mode).

Because the engine implements class inheritance by accumulation of attributes’ definitions within macros, it is necessary to cast every pointer of any given class to its base class in order to avoid compiler warnings when calling the base class’ methods. This exposes the program to hard to identify errors. In order to mitigate this danger, cast every pointer before passing it to the base class’ method by following this pattern:

When compiling for release, the macro is replaced by a simple C type cast; while for debug, the Object::getCast method will be called, returning NULL if the object does not inherit from the given BaseClass, raising an exception in the method (which must check that the this pointer isn’t NULL).

When an exception is thrown in-game in Debug mode, you’re presented with some output that’s meant to help you find the exact location that is causing the crash. These are last process, LP and SP as well as the exception message.

Looking for the message in both your game code as well as the engine would be the quickest thing to do but should give you only a rough idea of the problem’s root in most cases.

The LP (linker pointer) value shows you the exact location in program where the crash occurred and will lead you to the function that has caused it. Enable the Build: Dump Elf setting and recompile. The compiler will produce a file called machine-{MODE}.asm in the project’s build/{MODE} folder. It contains a huge list of all functions, their ASM equivalent and memory locations. Search it for your LP value and it will lead you to the faulty function.

The SP (stack pointer) value becomes useful in the (seldom) case of a stack overflow. Since the check is performed during a timer interrupt, it is possible that an overflow occurs between interrupts. By checking the SP value against the __lastDataVariable address in the sections.txt file, you can guess that there was an overflow. As described for the machine.asm file above, activate generation of the sections.txt file in the makefile.

# All of a sudden, I am getting a lot of different exceptions which I can’t seem to find a reason for in the code. What’s going on?

When things begin to break unexpectedly and in random places, it is almost guaranteed that a stack overflow is the cause. In that case, you need to shrink down the memory pools.

# I am getting the following error after compiling, what does it mean?

In the context of the engine, it means that the memory pool is too big. You’re trying to reserve more RAM than physically exists.

If you’re stuck and need some help, feel free to reach out! You can find us and other homebrew developers on the Planet Virtual Boy forums and Discord.